At the end of a long hallway is situated the Rothko Room, where upon entering one is enveloped with the large, reddish brown Murals. Located central to the unequal heptagonal space is a couch for viewers in a tone harmonious with the wood floor and the shape of the room. The soft light emerging from the edges of the white panels on the ceiling are the only source of lightning for the seven paintings.

A space to realize the artist’s original vision

The Rothko Room is one of the rooms added on to the museum at the time of its 2008 renewal as a permanent exhibition space for the Mark Rothko Seagram Murals, and it was designed by the architect Koh Nemoto*. The Seagram Murals were Rothko's first commission for a mural series and was meant to realize his desire to fill an entire room with only his own paintings, and they were originally intended to be hung in a dining room in a New York restaurant. Though the project never came to fruition, after a lapse of several decades this space in Japan has been prepared to embody the artist’s wish, and offers visitors a transcendent, fully encompassing viewing experience in which the art and architecture combine to form one unified space.

*In the original 1990 construction of the museum, Nemoto played a central role in the team directed by architect Ichiro Ebihara. Sketch for Rothko Room by Koh Nemoto, 2005 To allow for the most intimate viewing experience, each Mural is mounted on its own wall, thus the space takes the shape of an irregular heptagon.

After entering the room and quietly looking at the Murals for a while, subtle nuances and depth begin to emerge in what at first had appeared to be only opaque reddish brown surfaces. The subdued lighting that is a defining quality of the Rothko Room comes from the studio which Rothko had originally rented to complete the Seagram Murals, where external light entering through small windows high up in the ceiling was the only source of light. It is said that although he did sometimes use lighting fixtures directed toward the ceiling, Rothko never pointed lighting directly at his Murals. The Seagram Murals were created by applying numerous layers of thinned paint, which created the unique effect of the color softly rising up out of the canvas, a subtle effect that becomes lost in stronger light. Undoubtedly, Rothko knew that this feature of the paintings would only come out in soft lighting. Mark Rothko’s studio in New York at 222 Bowery, 1960
Photograph by Herbert Matter: Courtesy of Staley-Wise Gallery, NY
Without much light, the floor of this converted gymnasium was said to be completely dark.

The experience of being enveloped in paintings

Rothko's fervent wish was that his works speak to basic human emotions we hold deep within ourselves. Consequently, many ideas have been implemented to give this Rothko Room the greatest possibility in allowing museum visitors to feel at one with the artwork. Each of the corners in the room where the seven walls meet were designed with rounded rather than sharp edges to reinforce this sense that visitors are enveloped in the Seagram Murals. The size of the room has been kept small to create the sense of intimacy sought by Rothko. All details such as the distances between the adjacent paintings and between paintings opposite each other in the heptagonal room and the height of the ceiling were carefully designed to comply with the artist’s vision in order to create a room that transcends a space for viewing art in the traditional sense and leads to an immersive experience of deep introspection. 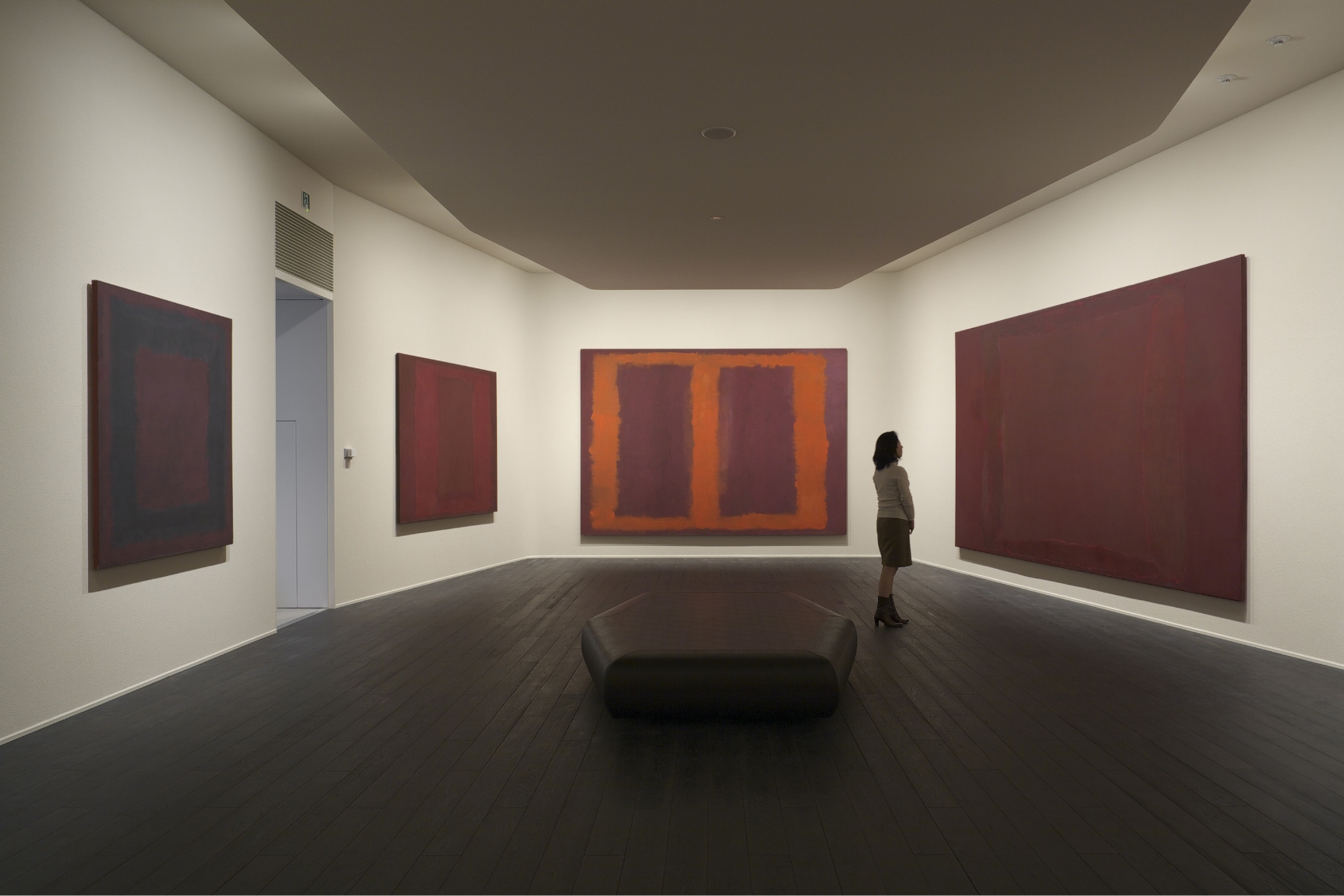